Mortgages play an important role in getting our dream home. It makes financing our desired property within reach as it helps spread the cost over a certain time period, making it easier on our wallets and bank accounts.

loanDepot plays a huge part in helping us achieve this. Focused on providing consumers with mortgages and other loan and refinancing options, this company makes owning a home possible. Learn more about the company, the loanDepot headquarters, and many others in this guide.

What does loanDepot do?

loanDepot is a financial lending company. As a matter of fact, it claims to be the second-largest non-bank lender in the whole of the United States, servicing all of the country’s 50 states. It specializes in offering and providing different lending services including home loans, personal loans, and even refinancing services.

It was founded in 2010 by Anthony Hsieh who specializes in the lending industry. Apart from the aforementioned services, loanDepot extends loans such as fixed-rate mortgages, ARM loans, VA loans, and FHA loans, to name a few.

The company works by directly lending to consumers in all 50 states. As of writing, the company has funded over $300 billion in consumer loans.

Where is loanDepot headquarters located?

The company signed a lease with Arden Realty back in 2011 for a massive office space that spans 82,835 square feet. The lending service reportedly occupies two out of the three buildings in the area. It has around 1,000 employees at its headquarters.

Apart from its headquarters in California, it has other loanDepot corporate offices in Massachusetts, Arizona, Texas, and Tennessee, giving it a total of five offices. Meanwhile, it has hundreds of branches across the different states of the country. 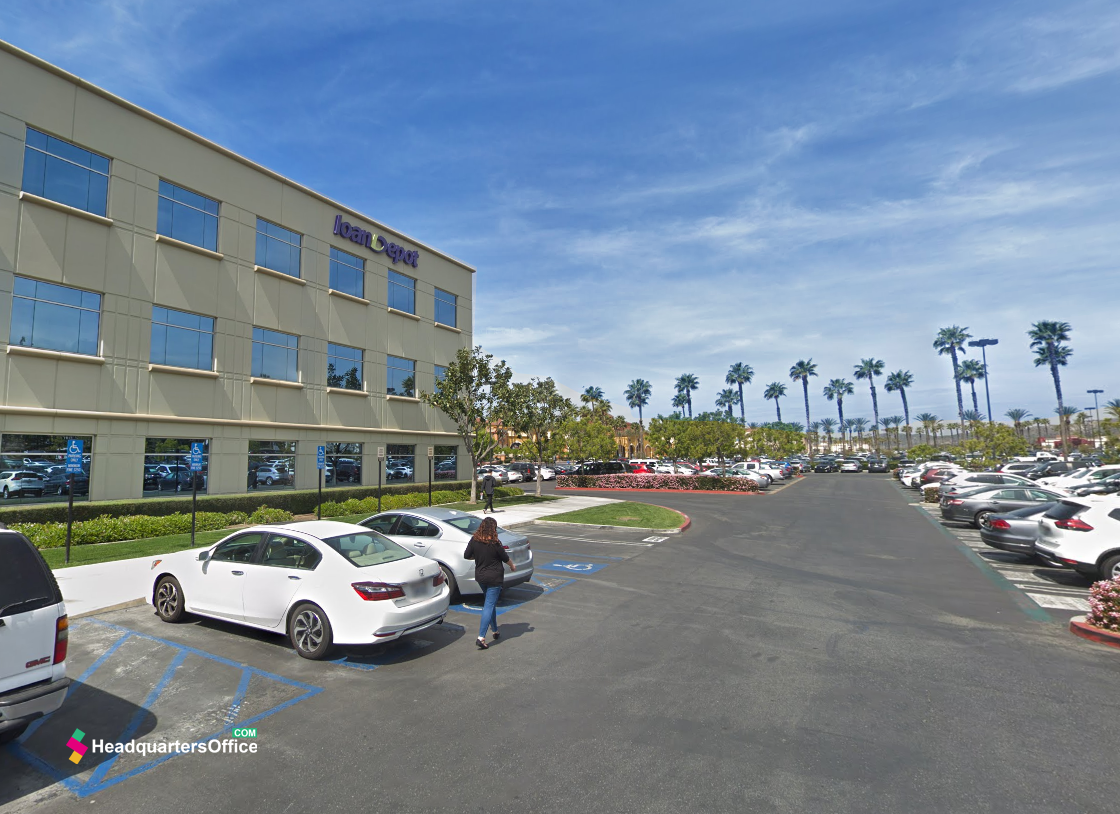 loanDepot has a total of 304 branches throughout the United States. Feel free to check its website to find the branch location nearest you.

There are a total of 2 loanDepot branches in Alabama. These are located in the cities of Hoover and Huntsville.

Arizona is home to 16 loanDepot locations in cities such as Phoenix, Scottsdale, and Gilbert. Phoenix has 3 branches, while Scottsdale and Gilbert each have 2 branches.

The state of Arkansas has one loanDepot location in the Bentonville area.

California accounts for 51 loanDepot branches. It has 3 locations in San Ramon, 2 in the Westlake Village, and 2 in Santa Clarita.

loanDepot has 6 branches in Colorado. It has one location each in cities such as Colorado Springs, Fort Collins, and Boulder.

Connecticut has a total of 4 loanDepot branches in areas such as Glastonbury, Greenwich, Shelton, and West Hartford.

Florida accounts for 21 loanDepot locations. It has 4 branches in the city of Jacksonville and 2 in Tampa.

There are 12 loanDepot branches in Georgia. 3 of these locations are based in Atlanta and 2 in Savannah.

Two loanDepot locations can be found in Hawaii. These are located in Wailuku in Maui and another one in Honolulu.

4 locations of loanDepot are found in Idaho. These are located in Boise, Coeur D’Alene, Eagle, and Lewiston.

loanDepot locations in Illinois come up to a total of 15. The cities of Bolingbrook, Lisle, and Schaumburg each have 2 branches in the state.

There is 1 loanDepot branch in the whole of India. This is located in Carmel.

Kansas is home to the lone branch of loanDepot located in Overland Park.

There are 5 Kentucky loanDepot branches. 2 of these are in Louisville, while Lexington, Bowling Green, and Paducah each have one.

7 loanDepot branches are located in Louisiana. Covington and Metairie each have 2 branches in their cities.

Maine has 1 loanDepot branch and it is located in South Portland.

Maryland has 3 branches of loanDepot. These are located in Annapolis and 2 are in Ocean City.

There are 6 loanDepot branches in Massachusetts. These are located in cities like Plymouth, Pittsfield, and Boston.

Michigan has 3 loanDepot locations. 2 of these can be found in Southfield, while one is located in Saint Joseph.

Minnesota has 8 branches of loanDepot. Eagan has 3 locations while Woodbury has 2 locations.

loanDepot has 4 locations in the state of Mississippi. 2 are located in Brandon, while Biloxi and Hattiesburg each have 1.

There are 3 loanDepot branches in Missouri. These are available in the cities of Branson, Kansas, and St. Louis.

Nevada has 7 loanDepot locations. The cities of Henderson and Las Vegas each have 2.

loanDepot has a lone location in New Hampshire and it can be found in Portsmouth.

New Jersey is home to 11 loanDepot branches. There are 2 locations each in Princeton, Paramus, and Shrewsbury.

There are 2 loanDepot branches in New Mexico. These are in Albuquerque and in Santa Fe.

New York has 10 loanDepot branches. These can be found in cities like Brooklyn, Garden City, New York, and Astoria.

10 branches of loanDepot can be found in North Carolina. The cities of Asheville, Asheboro, Huntersville, and Locust each have 2 locations.

Ohio has 10 branches of loanDepot. The cities of Findlay have 2 locations, while Mansfield, Columbus, and Springfield have 1 each.

Oklahoma has 1 loanDepot branch and it is located in the city of Edmond.

loanDepot has 9 branches throughout the state of Oregon. The cities of Bend, Eugene, Salem, and Redmond each have 1 location.

Pennsylvania has 10 loanDepot branches in the state. 2 of these are located in Pittsburgh. Philadelphia and Lancaster have 1 branch each.

There are 2 loanDepot branches in Rhode Island. These are located in the cities of East Providence and Jamestown.

There are over a dozen branch locations in South Carolina, reaching a total of 15. Myrtle Beach has a total of 4 locations, Lexington has 3, and Fort Mill and Greenville each have 2.

Tennessee has 11 loanDepot branches. The cities of Franklin, Johnson, Knoxville, and Maryville are home to 2 locations each.

There are 2 loanDepot branches in Utah. Both are located in Cottonwood Heights.

The state of Virginia is home to 9 loanDepot locations. There are 2 branches of the lending firm in Virginia Beach and 1 each in the cities of Fairfax and Bedford.

Washington has 9 locations of loanDepot. These can be found in some cities such as Vancouver, Everett, Olympia, and Spokane.

There are 3 locations of loanDepot in the state of West Virginia. These are located in Fairmont, Hurricane, and Martinsburg.

Wisconsin has a total of 4 branch locations. loanDepot can be accessed in the cities of Delafield, Middleton, New Richmond, and Wauwatosa.

Where can you get a loan with loanDepot?

You can apply for a loan online on the loanDepot website, where you are free to choose what type of loan you want to get, such as to purchase a house or refinance one.

Another way you can get a loan is to physically apply for one in any of its branch locations nationwide. There are over 200 branch locations across different states with the help of licensed loan officers to assist you every step of the way.

You can contact loanDepot through its hotline at (888) 337-6888 to 6789. Alternatively, you can also reach out to the lending company at [email protected]

Anthony Hsieh, the renowned mortgage industry innovator, founded loanDepot in 2010. It has been in the business for approximately 12 years now and it continues to be a leading firm in the lending industry.

Hsieh is an entrepreneur whose focus is on the lending and mortgage industry. He is considered an expert in the field, having founded a number of companies such as LoansDirect.com and HomeLoanCenter.com, both of which he sold to E*Trade and LendingTree respectively. Since 2012, it has reportedly nearly doubled its market share, allowing it to increase its loan officers. The company first introduced a new technology back in March 2017 that automates the loan process without requiring individuals to consult or talk to a loan officer to apply.

In January of 2018, loanDepot launched a new business unit called Mello. Mello is designed to create digital products and services that are made to complement the loans and mortgages offered by loanDepot. Under Mello, loanDepot offers Mello and Mello Home.

loanDepot teamed up with Century 21 Redwood Realty to create Day 1 Mortgage, a platform specifically made to cater to individuals in the mid-Atlantic area. The lending company successfully breached the $100 billion mortgage mark in 2020, with 300,000 loans originating under its belt. The firm went public on the New York Stock Exchange on February 11, 2021. In March of the same year, loanDepot purchased the home stadium of the Miami Marlins and named it to LoanDepot Park instead.

When did loanDepot go public?

loanDepot went public on February 11, 2021. It is now publicly traded on the New York Stock Exchange under the ticker symbol LDI. It has priced its initial public offering at $14 per share, offering around 3,850,000 shares of its stocks. The public offering closed on February 16, 2021, and was represented by Kirkland.

Yes, loanDepot pays dividends. It has declared its regular cash dividend at $0.08 per share.

Can you buy stock directly from loanDepot?

You cannot buy stock directly from loanDepot. Company stocks can only be purchased from registered brokers or through loanDepot’s transfer agent and registrar via American Stock Transfer & Trust Company, LLC.

How many loanDepot locations are there?

There are 304 physical loanDepot branches in the United States to provide services to customers in person.

loanDepot is a leading non-bank lender in the field of mortgage and lending. It has been in the business since 2010 and it provides customers with an array of lending products, all while focusing on a customer-centric approach.

The goal of the company is to help its customers achieve their financial goals. They have a team of experts and licensed loan officers, as well as advanced technological tools and platforms, to manifest and achieve their desired outcomes.